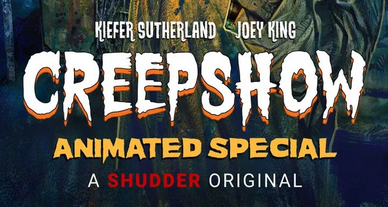 What a beautiful surprise to wake up to on a dreary and cold Thursday morning. Let’s get this review started.

Since childhood I’ve had an irrational fear of being stranded and/or trapped places. Kiefer Sutherland plays a surgeon who crash lands on a deserted island and has to do drastic things to stay alive.

What a solid way to start the animated special off. Kiefer Sutherland gives a great performance as a man constantly pushing his mental and physical limits as his body starts to fail him. There were a few genuinely shocking scenes that were easier to buy in an animated format than in live-action. The only downside to this was I kept thinking that Graham Rowat would have been phenomenal in this role

Twittering From the Circus of the Dead
Starring: Joey King

A bored teenager live-tweets from a zombie circus.

I tend not to enjoy anything zombie related since most of the stories are lazy rehashes of the exact same tropes and plot points almost beat for beat. This was a welcomed exception to that.

It started off a little slow but Joey King does a great job of selling everything and the story comes together really nicely as it plays out.

At only 45 minutes in length it zooms by really quickly and leaves you wanting more. 2021 can’t get here soon enough (for many, many, many reasons) so that we can all enjoy season 2 of Creepshow.