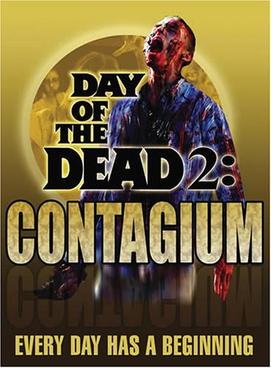 For a few years now I’ve been telling anyone who will listen that Dracula 3D is the worst film ever made.

Day of the Dead 2 Contagium now owns the spot of “Worst movie ever made” in my heart and has been embedded into the very depths of my soul. God-damn it this movie is awful.

Slight flashback: It’s 2005 and a 19 year old me buys this movie because it has Day of the Dead in the title and I didn’t know any better. I proudly bring it over to a friends house for movie night. We then spend the next 1 hour and 45 minutes wondering what the fuck it is that we’re watching. My movie picking privileges are revoked and I spend the next year trying my best to forget it exists.

Slight flash forward to 2014: Dracula 3D is released and it instantly becomes the most painful thing I’ve ever had to sit through (this includes funerals) and it sends me on a deep existential spiral wondering if I even want to bother watching horror anymore. The world stops making sense. In the darkness of my dreams I still see that fucking locust monster.

Present day: I see this movie streaming and think “Oh yeah, I remember it being bad but surely it’s not Dracula 3D levels of bad”. Let me tell you my friends, I’d give up years of my life to return to the naivete of yesterday before I pressed play on this atrocity. I could have done any myriad things instead of watching this but nope, had to see if it was as bad as I remember.

Day of the Dead 2: Contagium starts in an military hospital where a Russian man is being operated on. American soldiers show up and start killing everyone.

37 years later, this military hospital is now an asylum of sorts and our merry band of fuckups finds a thermos in the yard. They open it. Hijinx ensue.

God this is awful. At one point, either due to declining budget or no longer giving a fuck, they stop using blanks or even CGI for the guns. The actors run around and just “pew pew” it.

The only thing I will give this movie is the makeup effects as they’re pretty solid all around. The acting I won’t slag too much either, they’re doing their best to make something out of this mess and there’s an earnestness to some of the performances that just makes you feel bad for them.

To sum up, the movie that got 19 year old me banned from selecting things on movie night made 35 year old me look at Dracula 3D in a different light. I will never, ever forgive its existence for this. Dracula fucking 3D is no longer the worst movie I’ve ever seen which means that my suffering was without purpose. My nightmares were meaningless. The months of introspection and wondering if it was worth watching horror are rendered all for naught.

Not recommended unless you’re one of those people that enjoy The Room. This movie is The Room of zombie horror but without heart.