High Tension is a really good horror/thriller, sharing traits with classics like The Texas Chainsaw Massacre and Halloween. Its strength lies with the searing performances and brilliant suspense building techniques, but its weakness is that it’s too over the top. At times it goes so overboard that I felt some scenes should belong in a spoof of a horror movie, rather than an actual horror movie. It was the masterful ending that pushed the film into the depths of my memory, making it unforgettable. While I didn’t love the film, I loved many things about it. It certainly shocked and surprised me.

Two friends, Marie (Cecile De France), and Alexa (Maiwenn), go to stay at Alexa’s parents’ place which is located on a cornfield in the middle of nowhere. They soon find themselves being terrorized by a maniac killer that wields a straight razor and a rusty ol’ truckload of torturous weapons. It’s a crazy thrill ride, one that takes you on an extremely suspenseful journey.

I found the relationship between the two girls to be really interesting. One thing that’s made very clear is thatMarie is in love with Alexa, who is straight. It’s something many people can relate to really, unrequited love. I sensed that Marie was not only in love with Alexa, but completely devoted to her. There’s shades of resentment there too because a physical relationship is seemingly impossible between the two. You can sense this all through the eyes of Cecile De France, who genuinely looks like she both lusts after and loves her best friend. This brilliantly introduced relationship set up the film perfectly. Not only do we get to know our main character on a deeply personal level, we also see how much there is for her to lose.

If you’re wondering whether this is a scary movie, in my opinion it just isn’t. I wasn’t the least bit scared. There weren’t many moments that made me quiver, scream, or even gasp. However, I did feel overcome by the suspense of it all many times. To me, that’s just as important as the ‘scare-factor’ in horror movies. I think the chase scenes, the set-up of the story, and the highly believable performance by De France is what made it a really heart-stopping thriller. Its only drawback is that sometimes the horror music/sound effects were a bit much. For the most part, it wasn’t needed to add any suspense to the film. The lonely cornfield surroundings and the quietness is sufficient enough to creep me out. Oh, and another drawback is a truly ridiculous beheading scene (which I won’t go into). 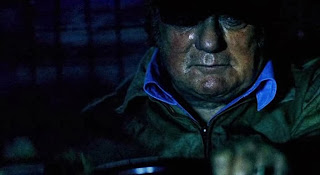 As for the killer, I found him to be intimidating, but also pretty lame. On the inside, he’s practically a carbon copy of Michael Myers (famous mask-wielding killer from Halloween for those who don’t know). This killer hardly ever shows emotion and he walks ever so slowly (as if no one could possibly escape from him). I never really got why a killer would walk slowly when there’s a large chance of their victim escaping… Oh well, horror movie logic. He comes across as some kind of hillbilly inbred from the sticks, which I’ve seen about a thousand times before (the best coming from the movie Deliverance). To be frank, I found his character to be an uninspired creation. One that doesn’t stand out in my mind, or strike fear into my heart. If there was an ounce of originality to him, other than his pest-control like clothes he wore, then that would have made High Tension way more exciting.

I found it pretty awesome how Marie’s mentality changed from fear to anger as time went on. If my best friend was moments away from being murdered, and if the police weren’t on their way to stop the murderer, then I’d like to think that I’d try to save my friend too. It makes for an exciting and super suspenseful sequence. The stakes can’t get any higher than that, which only made me root for Marie so much more. While it wasn’t done in a particularly memorable way, it did make my heart beat fast and my stomach well-up with butterflies. So I consider High Tension a horror movie well-done.

Now for the main feast. That ending. Man oh man, High Tension has one of the best endings I’ve ever seen. I did not see it coming, not for one second. The last 10 minutes of the movie… perfection. Love it. I just… words cannot describe how much the ending caught me off guard.

So in the end, High Tension was an above average, riveting, unforgettable experience. I loved the performances, I loved the suspense, I loved the soundtrack, and I loved that ending! There were flaws here and there, but I can easily forgive them. My favourite stroke of genius was the line “nothing can come between us”being uttered at the beginning and end of the film. Perfect way to start, perfect way to end. It’s not just a thriller, it’s a crazy cinematic experience that must be seen from start to finish. It really is unforgettable.