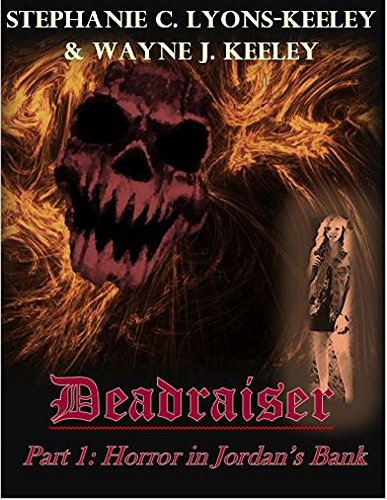 Big fish in a small town. Necromancy. Human sacrifice. Conspiracy. If you like these things, you’ll get a kick out of Deadraiser Part 1: The Horror In Jordan’s Bank). From the Goodreads summary:
DEADRAISER is the tale of a present-day practitioner who achieves what others have been unable to do for centuries — to raise the dead. The problem is that he must sacrifice innocent victims in order to maintain his power. Enter Fanchon (Frankie) Manning, daughter of the late movie star Erika Manning. She is the ideal sacrificial lamb for the Necromancer’s perverse desires. The only thing that stands between the Necromancer and the girl is Christopher McGuire, a lost soul who long ago has ceased believing in anything. In order to save the child, he must somehow rediscover his faith and summon the courage to take on the darkest, most sinister being imaginable.

I’m going to start off by saying that the story is outstanding. Authors Stephanie C. Lyons-Keeley and Wayne J. Keeley really captured the feel of the small town and the townspeople within. The book is a bit tongue-in-cheek, totally aware of how stereotypical the small-town characters are (the bumbling sheriff suspicious of the newcomer, the ne’er do well kids, the vulturistic journalist, etc.) and chuckling with the reader over it. Everyone was distinctive and developed; every action and line of dialogue was something only that character would have done or said. I especially liked Damon the caretaker; he creeped me out from the beginning.The book effortlessly jumps from character to character and back and forth in time, but I was never confused. It all felt natural, and the narrative flowed well. The authors nailed the tone and atmosphere, which made the dream scenes and death scenes effectively scary. I gobbled this book up whole chapters at a time, and looked forward to getting my next chance to read some more. I may or may not have put my toddler to bed a half hour early in order to finish this book; I won’t confirm or deny. Don’t judge me.

I wanted to give this book 5 stars, but I’m frustrated over the ending: the authors unnecessarily ended the story on a cliffhanger. In so many of our favorite series, there is an overarching conflict that spans the entire series. Smaller conflicts are put forth that the protagonist has to weather. Katniss has to survive the Hunger Games, but President Snow is still looming and a rebellion is brewing. Harry Potter makes it through his first year at Hogwarts and defeats Professor Quirrel, but Voldemort is back and gaining power. Eventually, the protagonist has to address that overarching conflict in later books, but satisfies the reader by completing the smaller arc in each preceding book. This doesn’t happen in Deadraiser. The overarching conflict is unresolved, and so are most smaller conflicts (one is resolved by the death of a character, but nothing the protagonist actively contributed to). So the ending feels abrupt and unsatisfying, like the authors are trying to stretch out the story for more money. If they are, it’s a smart move, business-wise, but it left me feeling resentful enough to make a whole thing out of it in the review.

In the end, I still recommend this book to old-school horror fans and lovers of the Occult, and look forward to devouring Part 2.